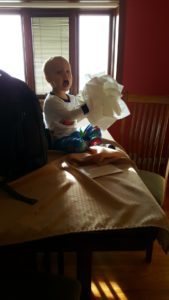 Has anyone ever given you questionable parenting advice? Hands up, because I know I’m not alone! Although there are a million different ways to raise kids, sometimes you just have to shake your head and wonder. I’ve been told these nuggets of wisdom from everyone ranging from my own mom to strangers, and in between.

“Does anyone have an iPad for that kid?”

Someone said this about my two-year-old at an event recently. It was a family-friendly event in a library, and Gabriel was having a blast running in circles around the book displays. He miraculously wasn’t running into anyone and he wasn’t grabbing everything off the appetizer tables (except the Hershey’s kisses). The person who said this out loud meant well, as in, she saw that I was also holding Gabriel’s baby sister and thought I could use a break from watching him run.

But the thing was, I wasn’t really watching him closely anyway. Joke’s on you, random lady! Gabe was having fun and I knew enough adults in the room who would step in if Gabe needed redirected. Besides, I hate using electronics as a crutch to calm my kid down – although sometimes when we’re out and about there is no other solution besides Baby Shark. This was not one of those times.

“If he doesn’t eat what’s for dinner, then let him starve. He’ll learn.”

This was the norm as my generation and generations before me grew up – either eat what’s served, or don’t eat at all. I remember many times sitting alone at the dinner table with a plate of cold vegetables in front of me, evidence of my stubbornness and dislike for brussels sprouts. I always hated this method of forcing your kid to eat. You just can’t. And toddlers are too defiant.

Gabriel is in occupational therapy for his picky eating because this age-old piece of parenting wisdom just sounded wrong to me. We work with him to make mealtime less stressful and more fun. In time, he chooses whether he wants to try new foods, and how much (if any) food he eats. Don’t get me wrong; it’s still incredibly frustrating and there are many nights his ‘dinner’ consists of a banana and a Nutri Grain bar (or waffle). 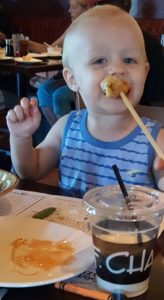 “Just tell him to suck it up and get over it.”

This one was regarding our teenager’s mental health. We don’t really know what caused our son to experience depression but treating it as if it’s something he is doing on purpose is simply wrong.

“Maybe you should go over there to feed your baby.”

At the auto show a few weeks ago, I was walking and feeding my four-month-old baby at the same time. Once we exited the elevator, one of the employees immediately came up to me and told me this. I had on a nursing-friendly top (so literally nothing was showing) and didn’t feel like stopping for 15 minutes so she could eat. I wanted to say five other things to this woman, especially when she pressed the issue, but chose to say instead “No I’m fine” and kept on walking. Mind ya business, friend. 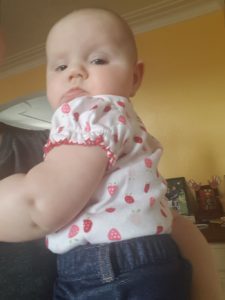 “You sure do seem to need a lot of help.”

I don’t remember who said this, but it was in the context of my in-laws coming over once a week (or more) to help with the kids in the early months of a new baby. They did it with Gabriel for at least the first six months and now, with Abigail, continue to do so. We’re lucky my husband’s family is close by, and we are not shy about asking for help when we feel we need it. It might only be once a week, but knowing I will have help getting dinner ready or corralling the toddler, or someone else holding the baby for an hour, is a huge relief. Besides, our kids will grow up having a close relationship with their grandparents. And for the record, I know that if my family lived closer, you’d bet my mom would be here that often, too! 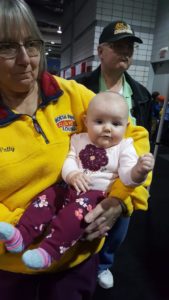 “It’s probably a lip/tongue tie. // You should cut out dairy.”

If I had a dollar for every time these responses come up in breastfeeding groups, I’d have a lot of dollars. Your week-old baby has some trouble latching? Must be a lip or tongue tie. Shallow latch? You guessed it. What if your baby is gassy or seems uncomfortable after some feedings? Better cut all dairy from your diet.

The thing is, these pieces of advice do come from a place of truth. A lip or tongue tie definitely can impact feeding… but not always, and it doesn’t have to be the go-to solution for a baby who just hasn’t mastered breastfeeding yet. And yes, dairy can be more difficult for some newborns to tolerate. But gassiness and some degree of reflux is pretty common in newborns and young infants until they get a little bigger, older, and don’t require frequent burping or upright positions after feeding. It’s an age and development thing more than a ‘mom needs to cut out dairy’ thing. Sometimes, these answers do solve the issue. But they come up so frequently I just have to shake my head and keep on scrolling. Ladies, get evaluated by a certified lactation consultant before you cut out an entire food group, I implore you!

Even when I was a first-time mom, I stopped asking for opinions, started scrolling (and ‘snoozing’) more often in Facebook mom groups, and trusting my own intuition. Parenting is hard enough without others’ opinions influencing how we raise our children. To be fair, there is plenty of positive, helpful advice out there, too. These are just the ones that stood out as either giving me a good laugh – or a beeline straight for the wine bottle and swear jar.

What’s the worst piece of parenting advice you’ve ever received?