Growing up, I was aware from a young age that both my parents had been married before. There were no children from those unions, and “Vince” and “Susan” were just figures from their past that I never gave much thought to. Talking to a friend of mine one afternoon years ago, she asked me how my parents had chosen to reveal those facts from their past to my sisters and me. She and her husband were trying to figure out when the best time would be to tell their young children about her husband’s previous marriage. She worried about how they would react and if that would taint their understanding of the meaning of marriage at such a young age. It was an odd question to me at the time, because I never remembered not knowing my parents had been divorced; it was something that they had always been frank about. There was no sit-down, no confession, no official announcement. For as long as I can remember, they simply shared this fact as if it were nothing dramatic or earth-shattering, nothing that warranted being hidden in the first place.

Fast forward ten years, and I, too, am married to a man who was once married to someone else. That fact is no secret to anyone, since he has two children with his ex-wife. Because we have a twenty-year age difference, his sons are in their twenties and we have three boys of our own who are 5,4 and 8 months old. When we got married and made the decision to start a family, we had to think about how much we would share with our kids. Of course, they would know they had older brothers, but toddlers obviously don’t grasp yet how babies are made. I finally understood my friend’s concern; talking about the fact that “daddy had been married to someone else” might put doubt in their mind about the solidity of our marriage, and we never wanted them to think of my husband’s older two sons as anything less than their full brothers. We also have an age difference that would someday be obvious to them, but for now, isn’t even on their radar. Our family looks a little different than a lot of the families they are familiar with. We wanted to be candid about that and stress that just because your family is different doesn’t mean it isn’t anything less than perfect just the way it is.

We made a decision, early on, that we would handle our unique situation with the same transparency my parents handled theirs. From the beginning, we told them that t 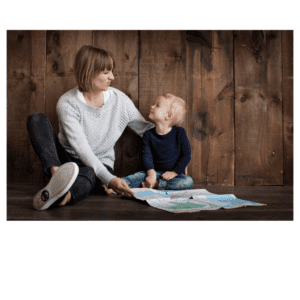 heir older brothers had a different mother, that she and Daddy used to be married and aren’t anymore. We’ve never called their brothers “half-brothers” because we don’t consider that to be the case, but we’ve always been upfront about the fact that they have their own grandparents and aunts and uncles and cousins. They know Daddy is 57, though they don’t fully understand what that means, and that their grandma, my husband’s mom, has many great-grandchildren who call her “GG,” while they simply call her “Grammy.” For now, that all makes perfect sense to them, because they don’t know anything else. Someday, I’m assuming they will have questions, but hopefully we have laid a foundation of honesty and openness so that they will feel comfortable asking them when they do arise.

Recently, I had to explain to my oldest two boys about close friends of ours who are going through a divorce. In keeping with the spirit of transparency we’ve tried to establish, I explained that their friends’ daddy no longer lives in the same house, and I tried to help them understand why that might be hard for this friend. They nodded and listened and didn’t have any questions, and it dawned on me that they are already familiar with the fact that not all families look the same and that sometimes parents don’t stay married. Maybe that’s because they have other friends whose parents are divorced, or maybe its because we have explained it to them before and so it’s nothing shocking or different from their perspective. I’m not sure, but I did think to myself that a lot of drama later in life could be avoided if we were just more honest and up front with our kids about the missteps from our past and how obstacles are really opportunities for growth and change instead of secrets that need to be kept hidden. I’m sure more difficult conversations will follow as they get older, but hopefully the foundation of openness and trust will mean something to them, and give us something to build on later in their lives.