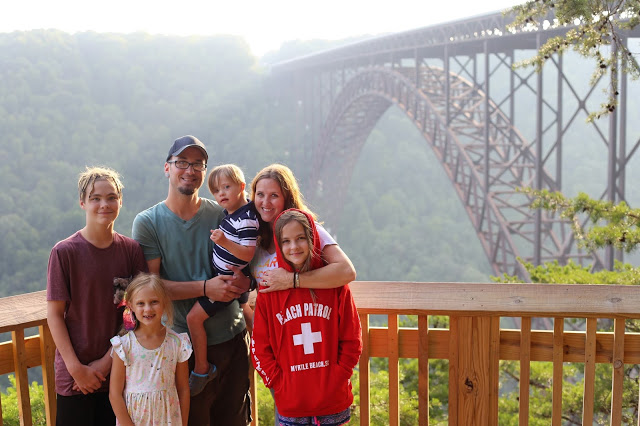 Up until recently, I would have told you that a post-birth diagnosis of Down syndrome was the biggest surprise in my life. I would have said that our son, who is rocking an extra chromosome, was the most unexpected blessing. My world, however, was rocked just a bit more!

I haven’t published new content on this platform in well over a year, and even my personal blog is lacking in new content. Perhaps you might remember my posts about what life is REALLY like with Down syndrome, or my posts about fun activities for kids. I missed blogging so much, but there was a good reason for my absence. 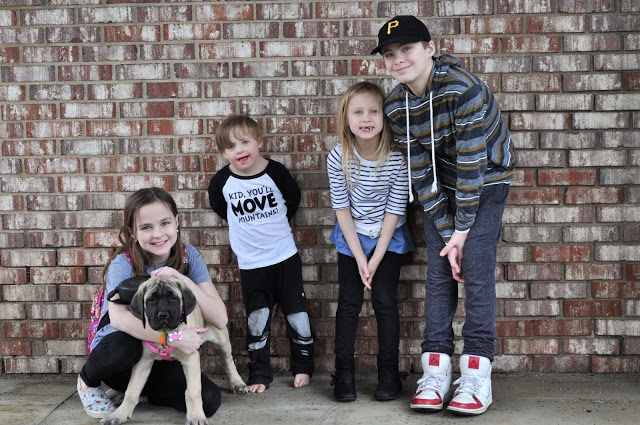 I always wanted four children, but I never expected to have them. I come from a very big family, but my husband comes from a small family. While I became an aunt at age 5, and grew up changing diapers, feeding babies, and babysitting my way through my childhood, my husband was never around babies. When we got married, he said 1 child, MAYBE 2. Over the years, we had four.

Despite the initial shock of finding out our 4th, and final, child had Down syndrome a few weeks after he was born, we quickly adjusted to life with our crew. 2-3 children is the norm around here, so we were officially in big family territory with 4 kids. We loved our big family, we were learning on this new journey in life, and we felt complete.

At the beginning of 2018, we realized that we were done having children. All four of our children were in school, we decided to get a puppy after going 3 years without a dog, and we started to give away all the baby items that we had in storage. We felt comfortable with our decision, and happily moved onto the next phase of parenthood.

At the end of August 2018, we went on our yearly beach vacation. Several weeks earlier, our son, Liam, who has Down syndrome, got very sick with a virus. I’m his primary caregiver, and I came down with the same thing as him a week later. I still wasn’t feeling well as we packed for our trip, and piled into the car, so I wasn’t surprised that I got car sick along the way.

The excitement of arriving at the beach took over, and I didn’t think much about it. At the end of the first day, after we were unpacked and visited the beach, we decided to go down to the pool for a night swim. Our Summer had been very busy up to that point, and I hadn’t been to the pool since the 4th of July. I quickly pulled on my swimsuit, and as I caught a glimpse of myself in the full-length mirror, I was shocked to see a little, round belly. I had to just be bloated, because there was NO way. We hadn’t changed anything, and I get horrible morning sickness from the moment I get pregnant until the moment I deliver.

I tried to enjoy the next day of vacation, but the what if was now on my mind. I was afraid to mention anything to my husband, but as we sat on the balcony that evening, I told him that I looked pregnant. He just laughed, said I wasn’t throwing up, and echoed my initial thoughts about it not being possible. Then he said, “Could you even IMAGINE having a fifth child?” We both laughed about it, and went to bed.

The next evening, after a full day at the beach, I made dinner for my family. We sat at the table that overlooked the beautiful ocean, and enjoyed the warm air, the smell of the ocean, the sunset, and the perfect moment. And then it hit. Out of nowhere, the nausea kicked in, and I raced to the bathroom. My husband followed behind me, shut the door, and quietly said, “Well, there’s our answer.”

I was absolutely shocked. What were we going to do? I wasn’t meant to have FIVE kids! We gave almost everything away, and we weren’t prepared for another baby. My husband was the one that was keeping things light-hearted, which was every bit as shocking. He just laughed, made jokes, and told me everything was going to be okay – we already had four, so what was the big deal about adding one more?

We still had half a week of vacation ahead of us, and knew we couldn’t hide my morning sickness from our two older kids. We decided to tell them, and we weren’t quite sure how they would react. Their reactions when we told them – happy tears and huge smiles – made us realize that everything would be okay. We already had a house, a big SUV, and four loving kids. We had everything we needed to bring another baby into our family!

When we got home from vacation, the whirlwind of back to school immediately began. In the span of one week, I took a pregnancy test to confirm the pregnancy, found out I was actually THREE months along, and sent the kids back to school. We told my parents because there was no way I could hide a pregnancy from them with hyperemesis in full force, but kept the news from everyone else. Other than driving my kids to school and activities, I became a hermit as the worst few weeks of morning sickness played out.

I was 20 weeks along when we finally announced our surprise pregnancy, and the next day, we found out the gender for the very first time. We didn’t find out the gender with our first four kids, and loved the surprise, but we figured the surprise of having a 5th baby was enough, and wanted to plan! (Just for the record, I do prefer NOT knowing!)

This time around, we did have more extensive genetic testing. Even though Down syndrome occurs by chance the majority of the time, we wanted to be more prepared if something was different. I was 5 years older than I was when I had Liam, and already had one child with Down syndrome, so the chances were a little bit higher. Everything looked great, so we were dismissed by the genetic counselor, and waited for the arrival of the biggest surprise of our lives! 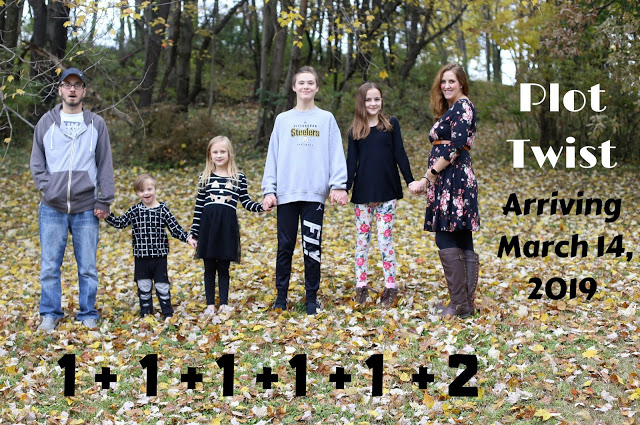 On March 8th, 2019, Coen Anthony joined our family. His birth was every bit as surprising as how we found out we were having him. I went into labor while getting fingerprinted for my FBI clearances to be a school volunteer, drove around delivering important paper work as I labored, then gave birth naturally. I am firmly on Team Epidural, so that was every bit as unexpected.

Coen got stuck at the shoulders coming out, and at that point they realized he was massive. They had to twist and pull him out as I howled in pain, and he tipped the scales at a whopping 10 lbs 3.5 oz and nearly 23 inches. He was a week early, and estimated to be 8 1/2 lbs. They were a bit off! 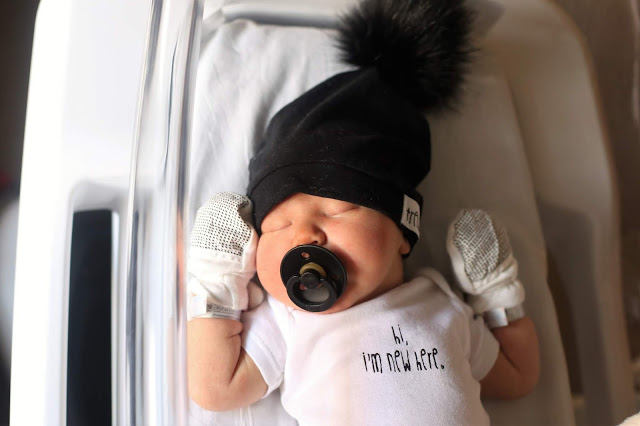 With his birth, our big family became even bigger, and life was busier than ever.  I would love to say we adjusted beautifully to life with 5 kids, but it was a difficult transition. Not only did we have a child with extra needs, as well as three other children to juggle, but we also had our first fussy baby. After a few months of the post-birth blues, and a lot of tears from the baby AND me, we finally started to find our groove. Coen mellowed out, and captured our hearts with his sweet spirit and contagious smile. Our entire family fell in love with our biggest surprise in life! 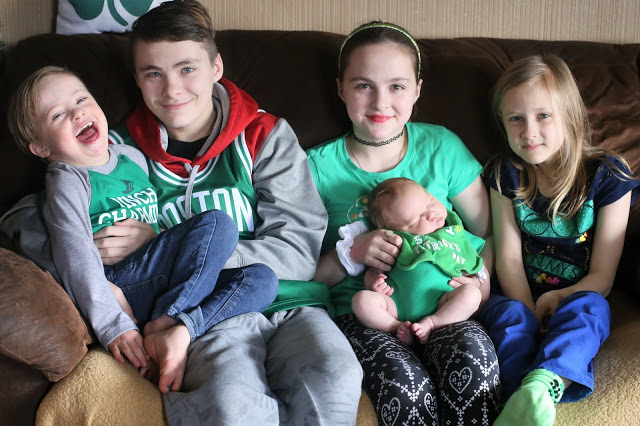 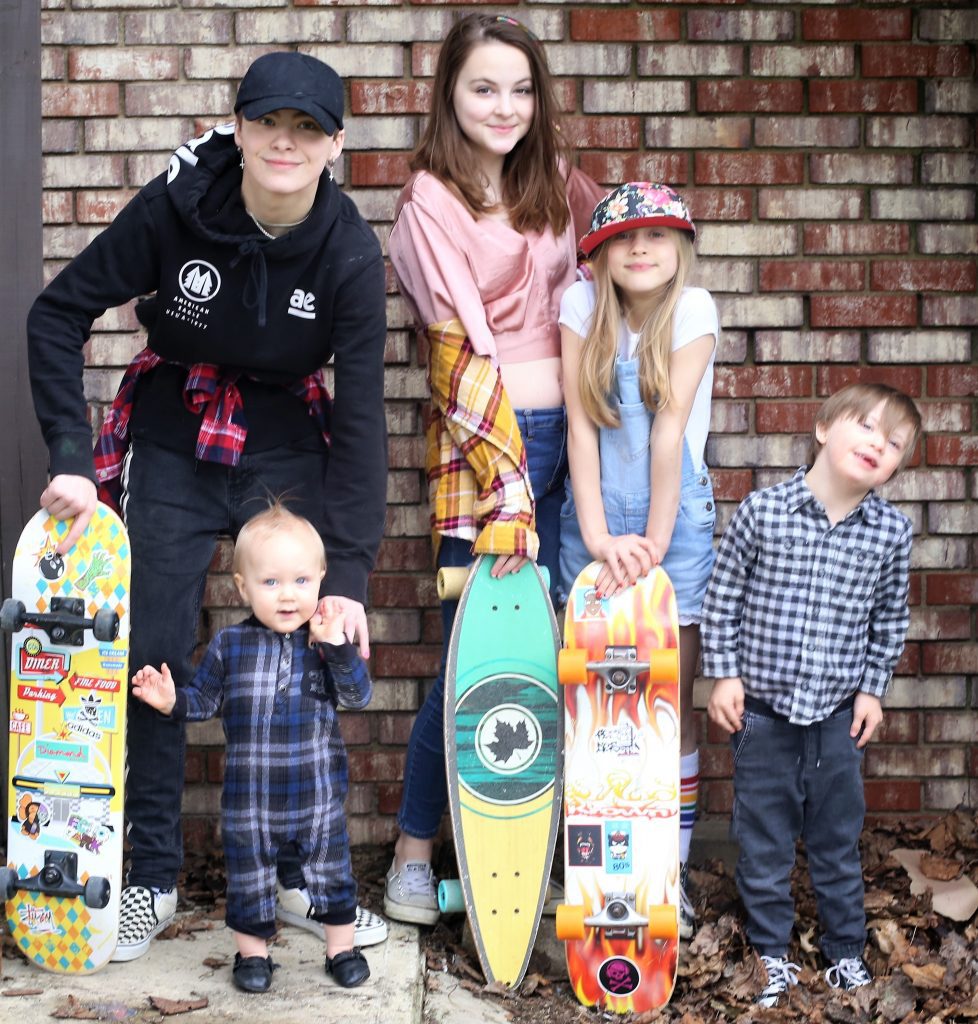 If you want to keep up with the chaos of our big, loving family, you can follow along at Our Five Ring Circus! You can also find us on Instagram and Facebook – when I have the time to post!