A little over 4 months ago I shared a big audacious goal for everyone who could access the internet to read. Truth be told, while I had every intention of training for the half marathon I didn’t think I would actually be running it on race day. I had played out multiple scenarios in my mind and was totally prepared to NOT be running on May 5th- my kids coming down with the stomach flu, a car accident, a broken ankle…the list went on.

Let’s rewind to two weeks before the race where I finished my last long run of 10 miles. I had done almost every training run by myself but this time I was with two others in our group and there was no stopping. I hit 2.5 miles and was in excruciating pain and my pace showed it. I knew I had to finish. The next day I stretched, I iced, I went to a chiropractor-NOTHING was helping and time was ticking away.

Then May 4th came and I had to go downtown to pick up my race packet. The expo was huge, and they had everything you could imagine, including wine & beer samples. I was like a kid in a candy store for the first time. 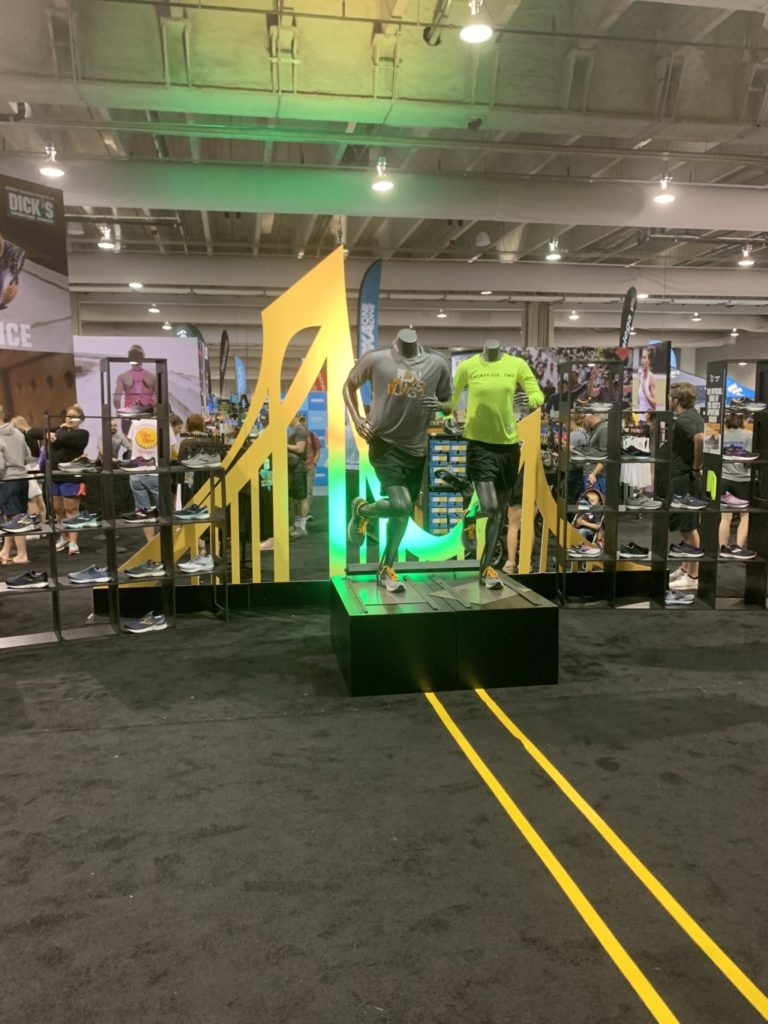 The next morning I woke up at 3:30am unable to sleep (after I hadn’t fallen asleep till 12:30am) and it was real. I’ll be honest, I had no idea what to expect. There were people everywhere. The music was blaring, and it was only 6:45 in the morning. Suddenly these busy streets that were usually filled with bumper to bumper traffic were filled with thousands of people all with a common goal; to cross the finish line. 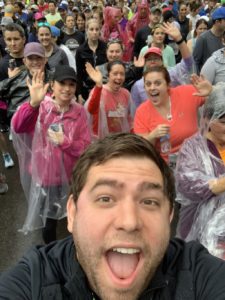 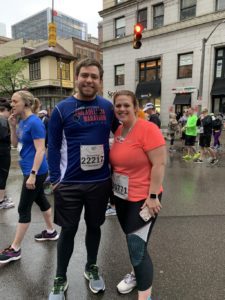 I was SO nervous. I was nervous that after a pretty intense injury that I wasn’t going to be able to finish. I was worried I would pass out on the course. I was worried that I would let people down. I was worried that the people who told me I couldn’t do it and that I was crazy for even considering this would be proven right. I was worried that 3 months of training wasn’t enough. My emotions almost got the best of me- and then my watch started going off with message after message of encouragement from friends and family.

My parents, hubby and kids, sister-in-law, and one of my best friends all woke up at 4a.m. and came downtown with my brother and I when we left- we had said goodbye to them in the parking lot but as we were running my brother was giving me updates about where they were waiting. Seeing my kids jumping up and down at mile 4 was one of the most amazing feelings! I felt really good till mile 6, my pace was where I wanted it to be and then I drank some of the Nuun sport drink and I have never EVER felt so sick in my life. Apparently I turned ghost white, and I’m pretty sure I asked Beth to call a UBER. Guess what? No UBER came. She did what she does best and pushed me to finish. 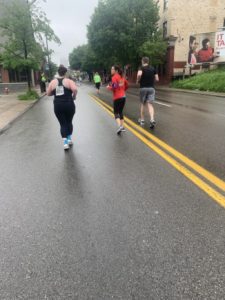 I looked at my watch and realized I had 7 miles left, and I wanted to walk. My hip was throbbing by this point. Every step I was painfully reminded that I had plantar fasciitis in both feet. Even when my brother would take a break, he wouldn’t let me. I literally can remember running down Carson Street and I turned around and almost everyone was walking, and He told me to keep going so I didn’t cramp. Every mile Beth was there giving me another reason to run. Every mile she high-fived me. Every mile she was telling me “Yes you can.”

The next 7 miles seemed like a lifetime. There were total strangers cheering us on, police officers congratulating people as they went by, but my personal favorite was the people passing out Twizzlers on the Birmingham Bridge. Running the half marathon has by far been one of the hardest things I have EVER done, but it has also been one of my greatest accomplishments.

My time wasn’t my best, in fact my pace was the worst it had been through all my training runs. 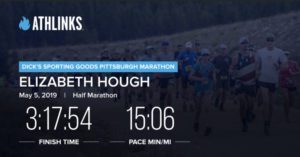 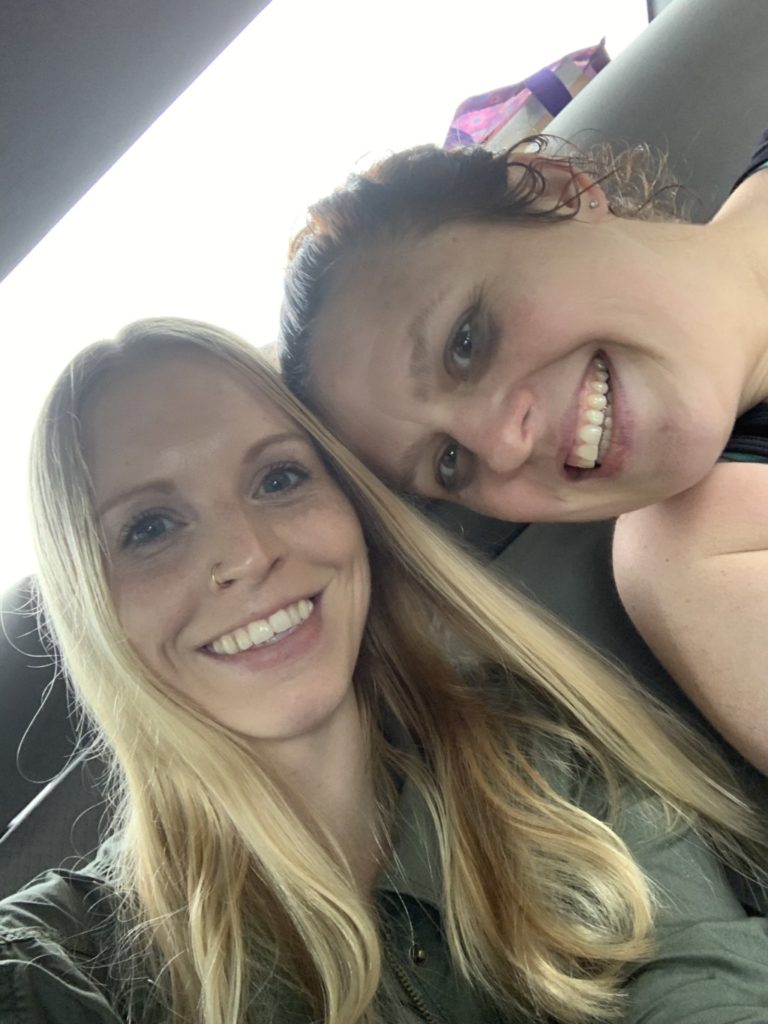 I was so discouraged about it but you know what? I ran. I finished. I did my best, and next time I will do better. AND- my friend who came to watch was so excited she agreed to run the half with us next year! 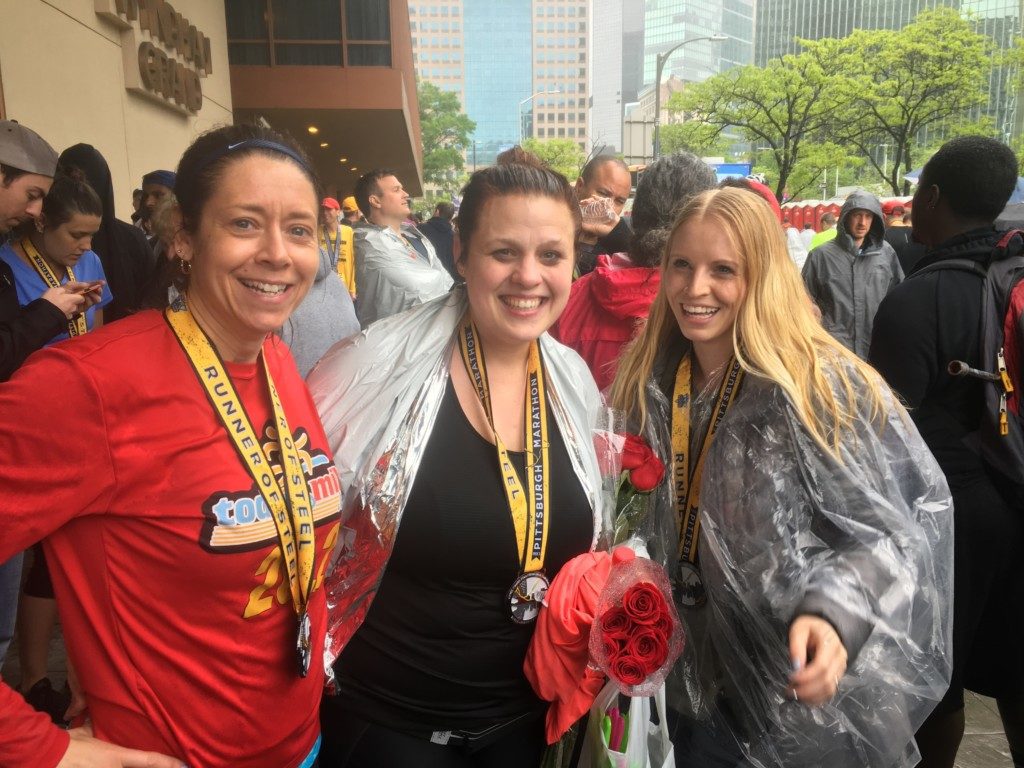 I didn’t go the gym expecting to make friends. I went to lose weight, and somehow got lucky enough to casually bump into the wellness director who has become that person always pushing me to do hard things and get outside my comfort zone.

Guys, I had never run a 5K and somehow she convinced me to train for a half marathon. Find your tribe, and hold on to them. Whether it’s training for a half-marathon or just doing something you never would have done 6 months ago- but go all in and don’t quit! 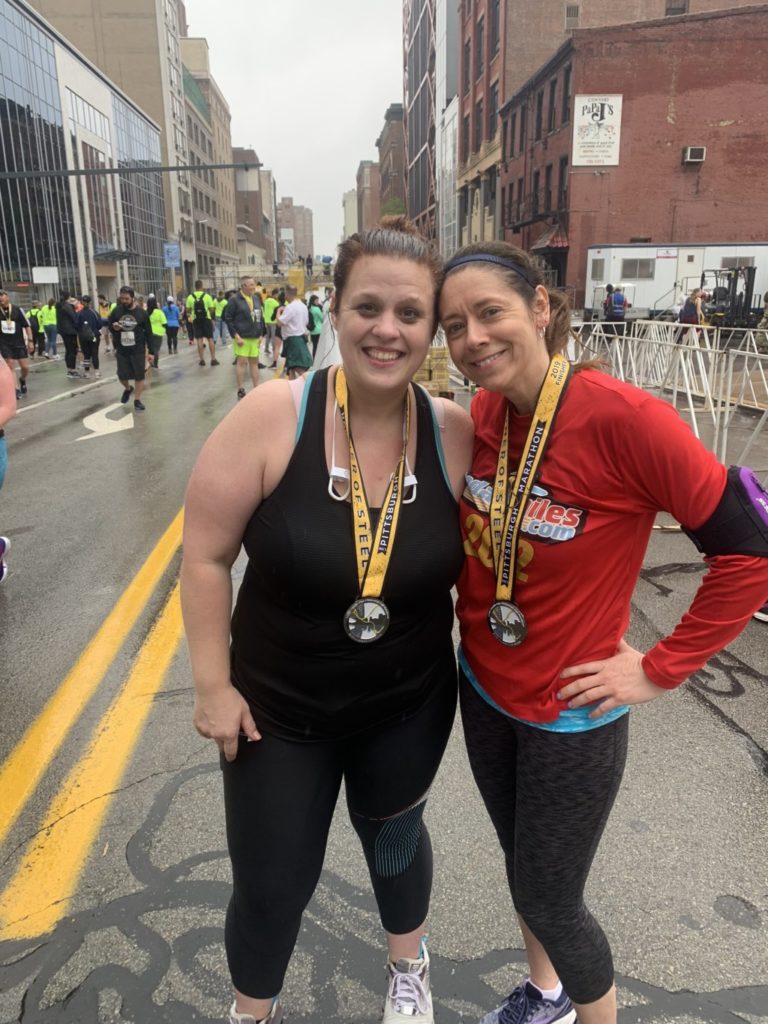