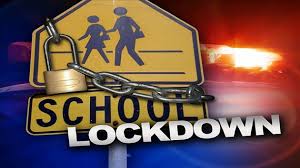 My middle two kids attend a preschool which is located inside a local middle school. When I was picking them up, I saw two police vehicles pull on the other side of the street, but thought nothing of it, as there typically is a police officer at the school around dismissal time.

On Wednesday afternoon, the school was on a lock down due to a “police situation” but no further information was given.

By the time I had heard about the lockdown, we had already arrived home and were inside going about our day.

My heart immediately sank. We didn’t know whether it was an issue inside the school, but nobody was going in, and nobody was going out. My babies were not even there but all I could think of was everyone’s kids who were sitting there with limited information. It later came out that it wasn’t a school issue but that they put the school on lockdown due to an arrest across the street.

Allegedly the suspect was “armed and dangerous” and he was across from the school all day. I passed the house where he was at least 25 times that day. My babies were inside the school across the street from him.  ANYTHING could have happened!

In light of this, I thought it would be helpful to share some things that have been helpful in talking with my kids. Now, my kids may not be the same age as yours but I think you can tweak it to make it work for any age.

First, Stay Calm! Children usually react first to an adult’s reaction. Think back to when your kids have fallen and gotten hurt; they almost always look to mom & dad to see how they are reacting to what has happened. When we start to panic, our kids panic too. So whether you are a parent, relative or a teacher try and stay calm regardless of the situation.

Second, make comparisons that your children will understand. Mine range from ages 2-6 so I had to think of something they all have seen or experienced, which happened to be a fire drill. At dinner we talked about fire drills, and the reasoning behind them. Fire drills are to practice so they know what to do in case of a fire. Practice doesn’t make perfect, it makes permanent. I explained to them today that if their teacher ever says that the school is on lockdown, it’s time to sit still and play the quiet game until the teacher says they can get up and play. While a lockdown may never happen, I need them to know how important it is to follow their teacher’s instructions. I also need them to know and understand the purpose is to keep them and their teachers safe.

Third, be willing to listen to their questions. My kids have 5000 questions a day. Literally. In these kinds of stressful situations the more they are prepared, the more they will understand how to respond. I’m not saying you have to bring up previous school incidents and go into detail about them, but typically my kids are asking questions because they don’t fully understand what you are saying. Immediately when I said something at dinner, my 5 year old said “why would someone do something that would hurt people in a school?” I think my jaw dropped. What could I say? So I responded with this “Sometimes people do things and we don’t know why. Sometimes things they do end up hurting lots of people”. We quickly digressed to me offering more food to them.

While I hope none on us EVER have to experience this first hand, I thought these were some good ideas that we could all share with young kiddos. The idea is not to scare them, but rather have them be prepared. Granted, I am not a teacher or a professional at this, but I didn’t feel like I could say nothing after today’s events.

It honestly is an Act of God that we missed the whole incident by minutes. I can’t imagine what I would be doing right now had I gotten that call knowing two of my children were inside the building.

When I called my dad and was telling him about it he said, “Listen – if you ever get arrested, please just make sure your face is clean and you have a shirt on”. Of course I don’t plan on ever being arrested but it did provide a bit of humor at the end of a long day.