Despite Complications, Mother Still Able to Have Natural Childbirth with AHN Midwives at Jefferson Hospital

Despite Complications, Mother Still Able to Have Natural Childbirth with AHN Midwives at Jefferson Hospital 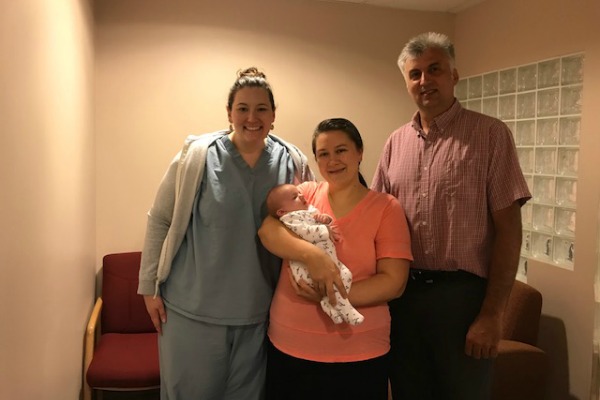 This was one of Luda Sheyko’s happiest life moments.

She had just delivered her baby daughter, Veronica, naturally. It was Wednesday, April 18, 2018. About 11 a.m.

With the umbilical cord still joining them, Luda embraced Veronica undisturbed for several minutes. They listened to each other’s voices intently. Felt the comforting warmth of skin-to-skin contact.

For a few stolen moments, it seemed as if the world had stopped spinning so mother and daughter could get acquainted.

Husband and father Alex Sheyko looked on and smiled, as did the staff of Allegheny Health Network (AHN) Midwives at AHN’s Jefferson Hospital.

“Everything went so well, and we were just overjoyed,” Luda said.

Happy conversation filled the room. But Jefferson Hospital was actually the last place the Sheykos had planned to be when little Veronica arrived.

Luda has always believed childbirth shouldn’t have to happen in a hospital.

“I think it’s a natural thing. Not something that has to be ‘treated.’ It’s just a natural process, and I prefer there to be less (intervention),” she said.

That’s why Luda had planned to deliver Veronica at The Midwife Center for Birth and Women’s Health in Pittsburgh. She had delivered three of her previous eight children there and highly praises their care.

But at 39 weeks into her pregnancy with Veronica, she developed high blood pressure. That meant Luda’s and Veronica’s care would have to be transferred to a hospital.

“You must have normal blood pressure to deliver at a free-standing birthing center,” said Amanda Shafton, an AHN Certified Nurse-Midwife at Jefferson Hospital. “When you acquire high blood pressure during pregnancy, you run the risk of complications like preeclampsia. So a pregnancy with high blood pressure requires a higher level of care, including in-hospital delivery.”

The Midwife Center delivers babies at a hospital in Pittsburgh. But, with her delivery date looming, Luda wanted to find a hospital with on-site midwives closer to her home in Pittsburgh’s South Hills. She began exploring all options.

“I started researching online for other midwife services and Jefferson showed up, and I decided to give them a call,” said Luda, who lives about a 20-minute drive from Jefferson Hospital. “I said, ‘I know this is my 39th week, but is it okay if I schedule an appointment with you?’ They said ‘Of course!'”

“The midwife community in Pittsburgh is very collaborative and tightknit,” Shafton said. “So the Midwife Center worked very closely with us at Jefferson to give us Luda’s prenatal records and make sure the transfer went smoothly.”

On April 10, when Luda arrived for her initial visit at Jefferson Hospital, she felt nervous and unsure. Would she be able to have a truly natural birth experience in a hospital?

“I really wasn’t used to the hospital setting,” said Luda, who didn’t experience any complications during her eight previous pregnancies. “I wasn’t sure how it would go.”

But within minutes of walking into the AHN Midwives office, Luda knew she was in the right place.

She recognized Shafton, who had worked at The Midwife Center for nearly four years. Shafton had assisted there with Luda’s other pregnancies.

“When I recognized Amanda, I felt like this is the place,” Luda said. “It was very comforting.”

Shafton gave the family a tour of Jefferson Hospital’s state-of-the-art birthing center. Luda saw how AHN Midwives is uniquely positioned to offer complete, woman-centered midwifery care with the on-site support of a doctor if needed.

“The rooms are very large and comfortable,” Luda said. “I liked the wireless monitors, so you don’t have wires everywhere around you.”

In particular, she was pleased to see that the center’s beds converted into birthing chairs. “I didn’t want to lie down during delivery,” Luda said.

“Whoever came up with the idea to have midwives at the hospital, it was the best idea,” Luda said. “If a complication does arise, there are doctors there and everything is available for mother and baby.”

Expectant mothers like Luda who have high blood pressure are typically advised to have labor induced at 37 to 40 weeks, said Lauren Narbey, a Certified Nurse-Midwife with AHN Midwives. Doing so can reduce health risks to themselves and their babies.

“We spent a lot of time at Luda’s first visit talking with her about why high blood pressure in pregnancy is dangerous and why extra testing is important,” Narbey said. “But since we promote woman-centered care, we also let Luda make her own decisions and we supported her every step of the way.”

Luda decided she wanted only minimal extra testing. But she did agree to buy a blood pressure monitor so she could take regular readings at home.

Over the next two weeks, Luda had one additional check-up and an ultrasound to chart Veronica’s development. All was normal.

But Luda did get some mildly disappointing news: Because she had already exceeded the 37- to 40-week recommendation, AHN Midwives advised setting a date to induce labor.

“The midwives explained it was better to have an induction than to wait. And the doctor, too, said it would be safer to induce,” she said. “I decided it was best to schedule my delivery after all.”

To Luda’s surprise, early on the morning of April 18, the baby began moving. “I actually woke up early that morning and was feeling contractions. I just tried to go back to sleep,” Luda said. “But they were coming closer together. So I told my husband, ‘We better pack our bags and go.'”

Luda and Alex got to Jefferson Hospital three hours ahead of the scheduled delivery.

By 11 a.m. — without Luda needing medication to induce labor — a healthy Veronica arrived according to nature’s schedule. Luda had a natural childbirth after all. 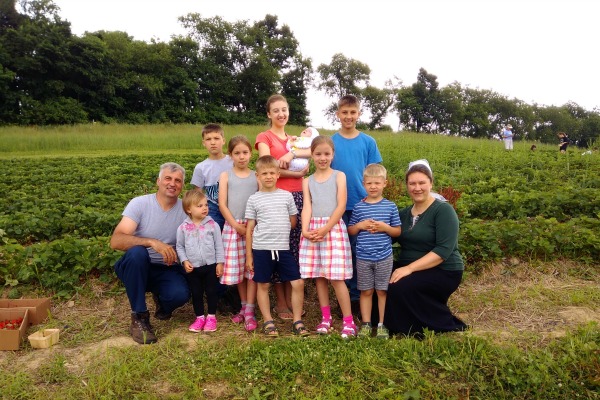 “It was important to Luda to have a very natural and thoughtful birth,” Shafton noted. “We were able to help give that to her.”

Luda credits her faith for the outcome, in addition to AHN Midwives.

“I have to give credit to God because, ultimately, God is in control of everything,” she said. “The whole process worked naturally, just like I wanted it to. The people who were around me were those I wanted — my husband and my midwife. The change to a hospital setting didn’t affect things in any way.”

Because of her high blood pressure, Luda stayed 48 hours at Jefferson for observation. During that time, the nurses and midwives encouraged and supported her to begin breastfeeding. (Jefferson Hospital recently became the first hospital in western Pennsylvania to receive Keystone 10 designation for breastfeeding advocacy.)

“I did appreciate that very much,” Luda said. “I do feel that the baby benefits from that.”

Today, Luda’s blood pressure is back to normal. And Veronica is healthy and growing.

Luda said her experience at Jefferson Hospital “has very much changed my perception. I think every hospital should have at least one midwife. Somehow, the midwife brings a more calming feeling.

“People think it’s old fashioned. But it’s so awesome they give that ability to women here at Jefferson,” Luda continued. “It ended up being an excellent choice for me.”