I never pictured myself as “crunchy” momma. In fact, at some point in my life, I may have labeled those baby-wearing, cloth-diapering mommas as hippies. Then I became a mom.

I started cloth diapering my first child when he was a little over six weeks old. My cousin had given me some diapers that she wasn’t planning on using with her next child, so I thought, “Why not?” 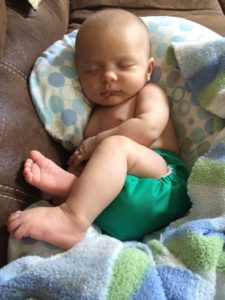 We started with pocket diapers, which for those of you aren’t into cloth diapers, have a little “pocket” that you stuff an absorbent insert into. Mind you, when I got my first set of diapers, I didn’t know this either. Our first foray into diapering, I laid the insert on the outside of the diaper, instead of stuffing it into the pocket, which resulted in a massive poo-splosion, and a diaper rash to boot. After cleaning the poo off baby, and myself, I hand washed the diaper and said, “Not for me.” I wanted so much to love them, but I just didn’t.

It didn’t help that I faced a lot of resistance to the idea – from my husband, from the sitters (I was still working full time at this point), and basically from anyone I encountered that I had to change a diaper in front of. “You use cloth? That’s so gross. Aren’t those for poor people who can’t afford diapers?” But I persisted. I mean, really, buy one set of diapers forever, or a new box every two weeks?

The more that I used our diapers, the better it got. I took the time to read some cloth diapering blogs, and got the real low down from moms who had already been there and done that, some, many times. I saw the financial impact of not buying diapers every couple of weeks, especially once I had two in diapers at one time, and I celebrated never having that terrifying moment when you run out of diapers in the middle of the night. 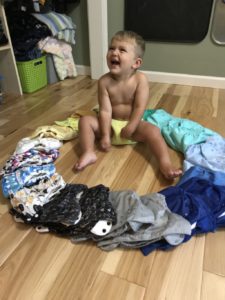 Why did I choose cloth?

I chose cloth for a number of reasons: affordability, eco-friendliness, the “ingredient” transparency of cloth vs. disposable diapers, but I gained a lot of other things. I found like-minded friends who were also interested in cloth. Friends who taught me about baby-wearing and other crunchy mama topics I’d have never known existed. I also talk to people about cloth diapers everywhere we go. I’ve talked to grandmotherly women in restrooms, while changing my boys, about how far cloth diapers have come; I’ve talked to other moms facing financial issues that didn’t know how easy it would be to make the switch and save that money for other things; and from these conversations, I’ve become pretty passionate about spreading the word about cloth.

And for now…we’re potty trained. We’re done with our diapers. Our diapers got us through two kids, and in a couple of months, will cover the cute rump of another little one, without me having to spend a single penny.

Stay tuned to Pittsburgh Moms Blog for an in-depth post on the getting started with cloth diapers.

If you need financial assistance with purchasing cloth diapers, check out The Rebecca Foundation. They are one of the many awesome organizations that supply diaper kits to families in need for little to no charge, and have chapters located in cities across the nation. We’ll talk more about organizations that can help fund your cloth stash in the next post of our series. Stay tuned!