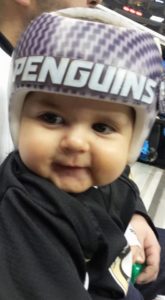 Our son was a great sleeper. He was sleeping through the night at three months. Once we settled into a routine, parenting was a breeze.

A breeze until we had to do tummy time. Tummy time was awful. I dreaded it while he hated it. Needless to say, tummy time wasn’t as consistent as it should have been.

He was almost five months when our pediatrician wanted us to see a Cranial doctor. After a few appointments, the doctors decided that he needed a helmet to correct his flat spot, but ultimately it was our decision. Fixing a flat spot with a helmet is pure cosmetic. We could have chosen to not have the helmet and the result would have been a flat head. Flat spots are more noticeable on men than woman because men usually have less hair. My husband lost his hair at a young age so we opted for the helmet.

He wore the helmet day and night. Twenty-three hours was the recommended time. Wearing a helmet for that long did cause some short term issues. He would sweat and the sweat would cause rashes, but they were easily maintained. As his head grew, the helmet got adjusted.

Three months after his first appointment, we were back at the Cranial doctor. One look over him and she was amazed. It is very rare for a child to only have to wear the helmet for three months. He exceeded the doctors expectations and the long-term goal.

Plagiocephaly is very common now-a-days because babies must be laid on their backs to fall asleep. It is most common in boys and good sleepers. Often we get asked about our decision.

Today, we stress to new parents the importance of tummy time. Even if the child dislikes it, you have to keep trying. Tummy time is essential in the development of strength for the child. Also, if you are faced with the decision of a helmet, go for it! I stand behind our decision. Yes, there will be stares from onlookers and you will have many questions and/or concerns. You have to be consistent with the twenty-three hour rule. Maybe not as strict as we were, but the more consistent you are, the better the results will be.

The helmet will bother you more than your baby. That is something we struggled with early on. However, we learned to turn the negative into a positive. My husband picked a crazy helmet design and we often decorated it with Penguin stickers.

Plagiocephaly was a tiny hiccup in our role as new parents, but if we had to make the decision over again, we would choose the helmet a million times!