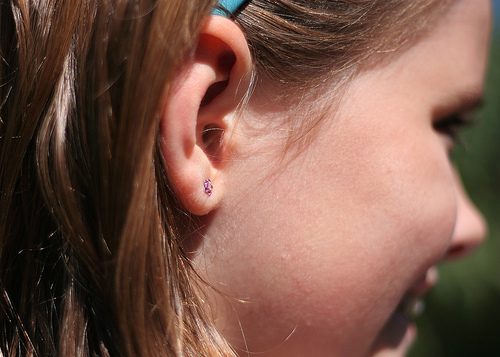 My daughter’s fascination with pierced ears began about a year or two ago, after a few of her friends endured the rite of passage at the local mall and came home with sparkly, shiny studs adorning their lobes.

Yes, she likes the way earrings look. But at 7 years old, my kiddo is not quite ready to confront the “scary-looking” piercing gun.

“Does it hurt?” she asks on occasion.

“Only for a second,” I tell her. “And then it’s over. They can even do both ears at the same time, so that it’s over quickly.”

“How bad does it hurt? Does it hurt like a shot?” she’ll ask. Being that it’s been more than 30 years since I’ve had my own ears pierced, I tell her that it’s hard to remember. But I reiterate that it only hurts for a split second.

I was six or seven when I had my ears pierced, and my mom had hers done at the same time. I recall sitting on a stool near the jewelry counter at our local JCPenney to have it done. Knowing my fear of needles, I was probably scared, maybe even terrified. I remember my mom having to clean the studs with rubbing alcohol afterwards, and I remember that they felt weird to sleep on for a few days. Other than that, I don’t remember much about it. It mustn’t have been all that traumatizing, though, because at some point during my adolescence, I had a second hole pierced, and then, in college, a third.

This conversation has probably happened 10 or 20 times in the last few months. If we’re at the mall and pass a piercing kiosk, I’ll ask her if she wants to go.

Some parents have their daughter’s ears pierced when they’re infants or toddlers, and I certainly understand why. It’s easier, for starters. If your daughter is going to want her ears pierced eventually anyway, you might as well do it while she’s too young to realize that it’s going to hurt. And I also understand and respect the fact that infant ear piercing is a cultural tradition for many families.

For me, however, pierced ears were never on my list of priorities when my daughter was an infant. A few of my friends’ toddlers had pierced ears, and the ears would get infected or the kiddos would repeatedly take the earrings out and lose them (and those surgical-grade studs are not cheap, y’all). Others would need to remove them to play a peewee sport, and eventually the kid would stop caring and the holes would close up, and then they’d have to pay to get them pierced again. Call me lazy, but none of this seemed to be worth the effort.

But more than that, I simply feel that pierced ears are a decision that my daughter should make when she feels ready. It’s her body, not mine, and I want her to learn that the decisions that affect her body — even seemingly harmless ornamental ones like having her ears pierced — are hers to make.

Maybe she’ll never be ready for pierced ears, or maybe she’ll change her mind tomorrow. Either way, I’m respecting her choice. When she decides she’s ready, I’ll be standing by, anxious to buy her that first pair of shiny, sparkly earrings.