Have you read the book, Snoop: What Your Stuff Says About You by Sam Gosling? If not, it describes how a person’s possessions and how they arrange them can tell us more about that person’s character than intimate conversations. After cleaning under my couch the other day, I realized that I should write a book called Snoop: What the Stuff Under Your Couch Says About Your Family. It would be a bestseller, for sure.

I swear my husband cleaned under the couch a month ago. Maybe two months. But it feels like yesterday. And yet look at all the junk! 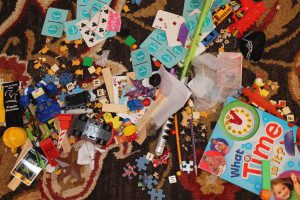 How is this possible? Also, ew. So gross. And just so you don’t think we’re total slobs, I will tell you that I vacuum this room every single night. Sometimes two or three times a day. (Yeah, I’m kind of a clean freak.)

This is what this room looks like every night before bed. Well, most nights. 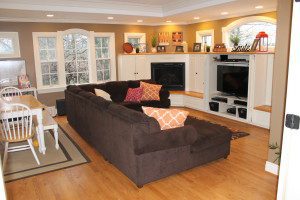 So how does the underbelly of the couch get so disgusting? That’s easy. It’s called I have five kids. 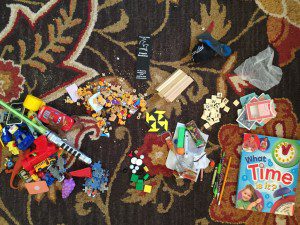 Please note Exhibit A: the pile of food. Lots of goldfish. Lucky Charms. Surprise, surprise, there isn’t a single Lucky Charm marshmallow. Such delicacies would never be wasted or lost. Obviously.

On to Exhibit B: the pile of game pieces. Do you know how frustrating it is to try to play a game with half the pieces missing?

Moving on to the miscellaneous section:

We have a nice assortment of toys, some money, and some black and gold origami (Go Steelers!)

Socks and a dryer sheet.

And the final exhibit? A pile of garbage.

So what does all this stuff say about us? You might think it says that we like to eat, play games, read books, and do laundry. What it really says, is this:

What does the junk under your couch say about you?