About six year ago, I became Catholic.  My now husband was born and raised Catholic, and I just wanted to share the same religion as my future spouse. My beliefs and feelings have remained the same over the past six years in regard to my religion.  However, I couldn’t have more different thoughts and feelings on parents who bring their children to mass.

For the past three and a half years, my husband and I have consistently taken our first born and now our two children under the age of four to weekly church.  There have been a few occasional times that were unable to attend, but for the most part we have been present and seated front and center.  Prior to having children, I would wonder why the families that came in late week after week didn’t just wake up twenty minutes earlier for the day.  I’ll never forget the one Sunday when a mom passed out Cheez-It crackers to her three children.  The day the dad who sat in front of us let his daughter paint with water colors I almost lost it.

Maybe it was the immaturity in me.  Maybe it was my teaching profession that steered me towards children and their behaviors.   Maybe it was just pure ignorance.  Now as a mom, I truthfully have to say it was the latter of my list.

Each week, my family and I barely make it to church on time.  It doesn’t matter if we try for morning, afternoon or evening mass.  It has nothing to do with “waking up twenty minutes earlier.”  Just last week as we were trying to get in the car for church, my three-year-old ran around the tree in our front yard three times.  Three times because he’s three of course.  Then as we are buckling him in his car seat, he announces he has to use the bathroom.  Out of the car seat he came.  Back into the house we went.  Back in the car and situated, my one-year-old had a dirty diaper.  Out of her car seat she came.  So, you see, we could have woken up two hours earlier, but things happen.  How wrong I was for thinking like I did prior to having children of my own.

Snacks may or may have not have been one of my son’s first words.  We have taken everything from Animal Crackers to applesauce to raspberries.  My kids are content when they are fed and sometimes they have to be fed during that hour of church.  Recently we went to a baptism out of state.  We left our house prior to our children eating breakfast because they weren’t ready for it.  Once we arrived at the church for the baptism, I busted out a lunch box.  A full-blown LUNCH BOX.  I saw smiles and snares from people located around us.  However, my husband and I both agree eating in church is better than hangry children in church.  We have learned to pick and choose our battles.

Quiet toys are also a necessity for our kids.  We have allowed our son, Collins, to pack in his church bag small cars, sticker books, pipe cleaners and drawing paper.  For the most part, he plays with his toys quietly, and it doesn’t seem to be too much of a bother.  My husband and I debated on sitting in the “cry room” at church.  After trying it one time, we decided it wasn’t a good fit for us.  Together, we decided that if we are going to church we want to try to get something out of it.  The cry room had too much going on for us as adults to focus.  While it’s very hard to listen and reflect on every word from mass, we do try to pick up on one or two key points.  As my children get older, I’d like to take those key points and turn them into Sunday dinner discussion points.

As you can see, church is something we take seriously and want to instill our religion into our own children.  This is not possible without taking our children to church and being present week after week.  There have been times when parishioners have come up to us to commend us on the job well done.  They are happy to see young children in church, and don’t mind when they babble, drop something, yell or announce they have to go potty.  But there have also been times where the stares and looks of distaste from other parishioners have not gone unnoticed.  I think too many times during mass I am too focused on keeping my children well behaved that I miss the big point on why we’re at church in the first place.  I am constantly looking around hoping my kids aren’t too much of a distraction to those around us.  As a mom, I am my own worst critique, and want my children to behave as best as they can.  We all know that’s not the case.

I often reflect back to times prior to children and remember how I would think and feel when I saw children acting the way they did.

Kuddos to all parents out there everywhere for tackling the task of getting the children out of the house and to church regardless of the religion or time of arrival.  You all are amazing and are rock stars.

Moms and dads who take their young babies, three cheers for you.

If church falls during feedings or nap time, who cares?

Parents that bring more kids than the parents have hands, you deserve an award.

In a place where we go to become better people, so much mom guilt is present.  Set that guilt to the side regardless of how your children are behaving or what they are eating.  Pat yourself on the back for just being present.  As my grandfather once told me, life’s about showing up.  That’s what my husband and I do week after week.  And if we offended anyone out there due to our snacks, toys or whispering, I’m truly very sorry.  But please know we’ll be back next week, front and center.  We’ll be ready to take on church once again with Goldfish in hand. 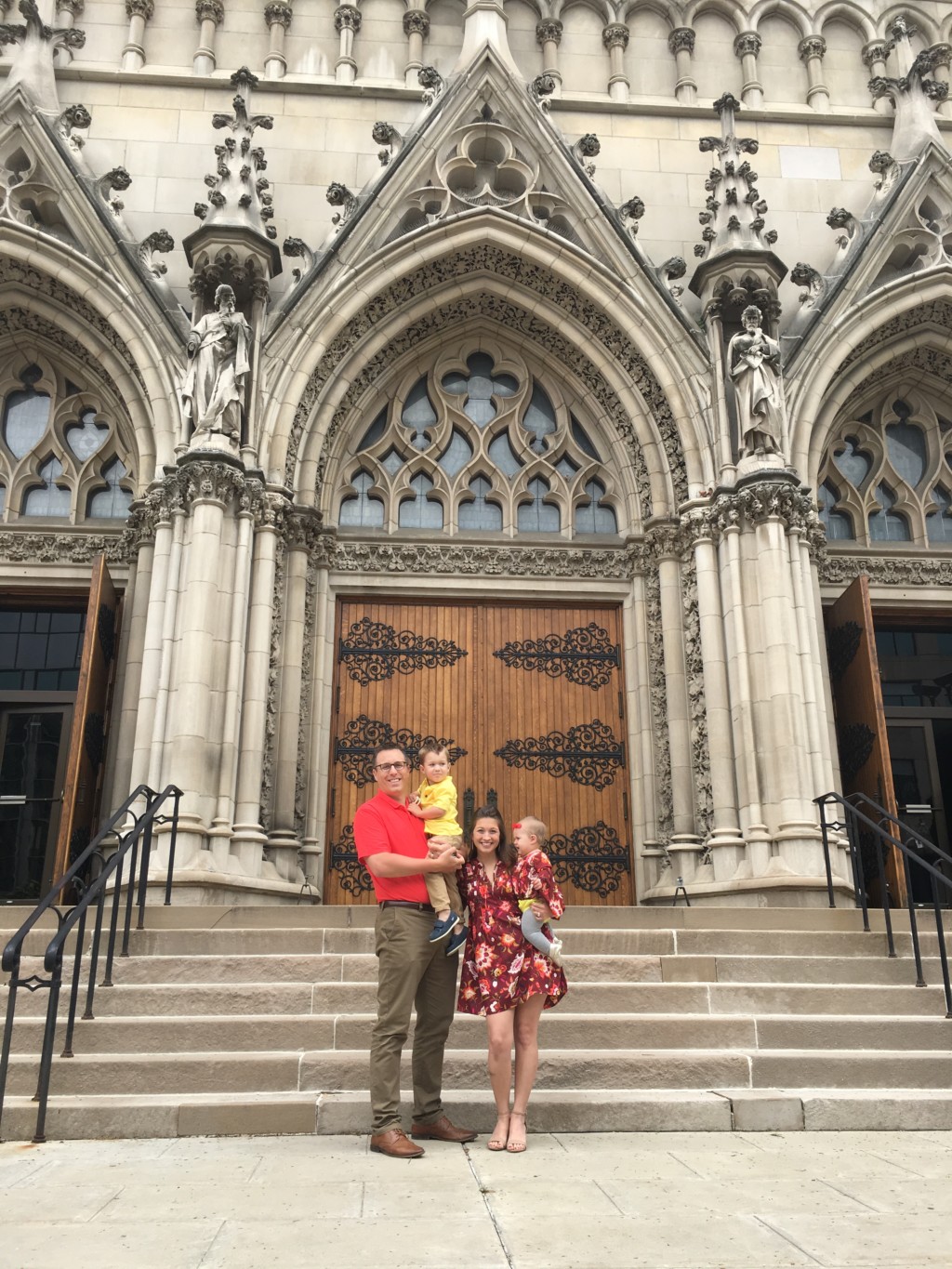