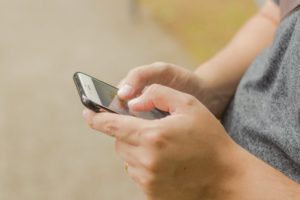 Parents of teens, I have a question for you: how many times have you said you wish you could take away your kid’s stupid cell phone?

This statement usually comes after your son or daughter spends a ridiculous amount of time watching YouTube, texting, playing games, or my personal favorite (sarcasm), messing around on social media. We hated it. And after some other extenuating circumstances this past year, we took away the 16 year-old’s smart phone and replaced it with a $50 flip phone from the early 2000’s. We have had no regrets. Let me explain.

We already put limits on his cell phone use, like not being allowed to take it upstairs with him at night, not downloading apps without our permission, and knowing we could look through it at any time. The problems arose when a) he didn’t follow the rules and b) we noticed a consistent decline in his behavior, especially surrounding phone use.

The more time he spent on his smart phone, the worse his mood became. He would still sit downstairs with the family, but wouldn’t interact, and was easily agitated. He had a bad attitude anytime he was asked to put his phone down and take a break. He had downloaded Snapchat without permission one too many times, and insisted it was the only way he could talk to his girlfriend. Social media and texting, we know as adults, aren’t really “talking.” They’re artificial conversations. And can be highly secretive. This behavior among teens is more the norm than the exception now, when it comes to their phone. It’s like they can’t exist without it. 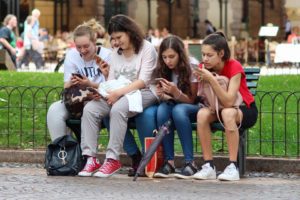 The moodiness, irritability, and addiction to the device had become too much. So we said, enough is enough. And one day, when I was by myself at the mall, I stopped in to the AT&T store, bought the only non-smart phone they had, and switched his number. Here’s what happened.

With him: He was upset, to say the least. He was already coming off a week without electronics, so the adjustment wouldn’t be as bad as say, you come home from school and suddenly don’t have a phone. He said he didn’t know how he was supposed to communicate with anyone; how could we do this to him; etc etc. But, after he had some time to let our feedback sink in, he understood why we replaced his phone. This didn’t mean he was any happier about it, mind you. Just that he also recognized that his phone had become part of the problem.

At school: Kids suck. He was asked if his parents became poor and couldn’t afford his phone anymore. He got made fun of. But you know what else happened? He stopped texting during class. He left his phone in his book bag during the day. I can’t say whether he paid attention more in class, and they still had their Chromebooks (school policy). Mostly he kept his distance from his phone because he got tired of the comments. But he took it all in stride.

So, with his brand new phone from 2001 he was unable to access the internet or social media. No more hours upon hours per day of YouTube videos, Snapchat conversations, or texts. In the short term, he did actually dial numbers and call people, a few times at least! He wasn’t tied to his phone, and we saw the fun, happy side of his personality more often. He was present. He could still take pictures, but the camera quality was not that great, obviously. He could not stream music on Spotify, something that really irritated him. But we kept his smart phone and would still allow him to listen to music or access games or apps on Wi-Fi.

Other short-term positive side effects we noticed included pursuing old hobbies to fill the time, like drawing. He took out his old Legos from time to time, and would build them in the living room with his little brother. He started listening to music on the digital record player he got for Christmas a couple years ago.

We also had to evaluate how we were using our phones. We noticed that we also spent too much time on them, whether it was looking something up in the moment, browsing Facebook, or texting family or friends. So we also made a dedicated effort to lose the phone for large chunks of time in the evenings with family.

Some unintended effects were that he didn’t transfer most of his contacts, so he only put in a small handful of numbers. He helped himself to lose touch with a lot of people at school that way. This was a hard year all around, so the phone was only a piece of the puzzle, but he did isolate himself, using the excuse of “it’s too hard to text/I can’t use Snapchat and so I can’t talk to anyone anymore.” We placed no restrictions on who he could talk to; that was something he did on his own. He only maintained a few text conversations, but eventually stopped calling his girlfriend, preferring instead to talk only via text. We could still monitor these conversations if we felt like we needed to, but it was much harder because of the small screen and scrolling functions. PIA, actually, so we only checked in if there was an urgent concern about something. At one point, he thought that if he “accidentally broke” his flip phone he would get his old one back; a big NOPE on that one – if he broke his flip phone, he would get no phone at all.

Fast forward six months, and he still has the flip phone. He’s used to it now. Still hates it. But after a few months, reverted back to some of the same behaviors as before, but as I mentioned, there were other, extenuating circumstances as well.

This post from the archives stirred a debate on checking your kid’s cell phone use. Have a look!

For the new school year, we will more than likely give him a smart phone back, with some changes. It will probably be an iPhone instead of an Android device, since iPhones have a much higher level of parental control built into the device automatically. For one, if the iPhone is backed up on the Cloud, you can access text conversations, downloads, data usage, and calendar events from any computer. I think you can also set time limits on it; it’s been awhile since anyone in this house used Apple tech.

Do we regret our decision to take away our teen’s cell phone? No. He needed to mentally distance himself from a world of fake conversations., and he had been hiding things from us and not telling the truth. He was addicted to his phone. It’s real, too: phone addiction. If you don’t believe me, do some research on Google. After 10 minutes, you’ll find dozens of sources that point to increased electronic use correlating with higher levels of anxiety and depression, especially among teens. That’s not even counting cyber-bullying.

Having a phone, any phone, when you’re a kid or a teenager, is a privilege, not an entitlement. We pay the bill and we’re responsible for their health and well-being. Our hope is that someday he will look back on the six months without a smart phone and realize that it allowed him to take a step back, re-evaluate how he spent his time, how he interacted with those around him, and not to take anything for granted. Maybe he learned something about truly communicating with other people, and not to let an inanimate object influence his mood or behavior. Or maybe he will just resent his parents for taking away his phone when he was 16; who knows.

What do you think, parents? Please weigh in on your experiences with and thoughts on teen cell phone use. 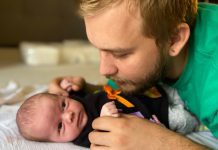