You’ve probably heard the saying, “All good things must come to an end.” Well, this is certainly true with pacifiers. They really are great little tools for helping a child soothe and sometimes even sleep. However, they can also cause problems, particularly with sleep.

On my website, you can download a free Pacifiers and Sleep Guide. It teaches you the pros and cons of pacifiers and how they effect sleep. If your child is having sleep troubles due to the pacifier, this guide will teach you how to solve these issues and/or help you decide when it needs to go. When you’re ready to get rid of the pacifier, here are a few possible ways to do so: 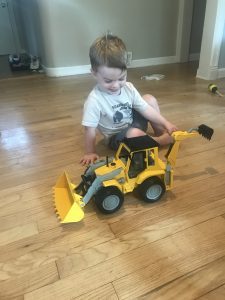 When Gideon was around 2.5, we got rid of his pacifier, or his “raffie,” using the method of letting him buy something with the pacifiers. I talked it up for a few weeks before we did it, so he knew it was coming. Then, we took him to Target and let him pick something out to buy. He chose an excavator toy with movable parts. Thankfully, the cashier agreed to play along and take his pacifiers as tender to buy the excavator. Then, my husband took him out and I paid for it with real money! You can read my full account of our experience using this method here: Ditch the Pacifier with Ease.

We were planning to use the same method with Phoebe, and have been telling her all about it. We’ve even taken a few recent trips down the toy aisle for her to scope out something she might want to buy with her binkys. We were just waiting for the “right” time. However, one random weekend we accidentally did something completely different…and it worked! 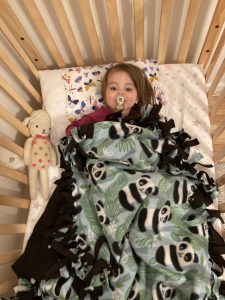 That Friday night, we couldn’t find Phoebe’s binky anywhere. She’s had many over the years but we’ve lost some here and there and were down to one. And it was nowhere to be found at bedtime. We felt really bad; we hadn’t planned on making the transition that night and hadn’t prepared her for it at all. So, I found one of those blue newborn soother pacifiers that you get at the hospital in our bathroom closet. I quickly cleaned it and gave that to her to go to sleep. She wasn’t thrilled about it, but it was better than nothing.

On Saturday night, we let her have that soother one again. Then, on Sunday night…the blue soother pacifier was also missing! We again looked all over the house and couldn’t find it anywhere. At this point, we decided that we needed to roll with it. So, we explained that her binky was gone and that she needed to sleep without it.

She cried for it a little at bedtime, as can be expected. However, she turned over and went to sleep much quicker than I anticipated. There were two wake-ups in the middle of the night when she asked for her pacifier. I just reminded her that they were gone and gave her some comfort before she fell right back to sleep.

Meanwhile, I was scouring the house for the missing binkys with the plan to trash them before she saw them. Her original one was found sitting inside a diaper pail which hadn’t been used since she’s been potty trained. I have a feeling her younger brother put it there! The blue soother one was found on the very top shelf of her closet. My husband had said he felt like he put it somewhere but couldn’t remember where.

They are now both in the trash and we haven’t looked back. Honestly, the cold turkey transition went about the same as the “using pacifiers as tender” method. With both, there were a few days of adjustment, but the kids were eventually fine without them.

A third option is using the pacifier fairy. It’s very similar to the Tooth Fairy, but instead of leaving her your tooth, you leave her your pacifiers. Then, when the child wakes up in the morning, the pacifiers are gone and he/she finds a present that the fairy has left in their place! There are even Pacifier Fairy books that you can use to present this idea to your child (disclaimer: I haven’t read any of them.).

The Most Important Part…

Regardless of which method you choose to use, the most important part is that you GET RID OF THE PACIFIERS at the beginning. When my son used them to buy his toy, we asked the cashier to throw them in the trash after he handed them to her (they were in a Ziploc baggy, FYI). With the Pacifier Fairy, you’d take them, leave the toy, and then throw them out. The main reason to do this is that it forces YOU to commit.

Listen, your child is not going to like this transition, no matter how or when you do it. He will cry, he will ask for it, he will fuss during the day for it. It needs to be physically gone from the house so that you aren’t tempted to give it back to him in a weak moment. Otherwise, you might end up with multiple failed attempts at getting rid of it, which won’t be any easier on him in the long run. You’re still eventually going to have to get rid of it and stick to it, so you may as well just do it from the start!

It’s also important to note that I only recommend using the Pacifier Fairy and Pacifiers as Tender methods with children 2.5 and up. Children much younger than that likely won’t understand the concept. Cold turkey is going to be the easiest way if you’re trying to get rid of it when they’re younger.

Pacifiers can be helpful, but can also be a hindrance if your child is too dependent on them. Also, even if they’re not, any reliance on pacifiers has to end at some point. Use one of these proven methods to take the pacifier away and help your child adjust to the changes! 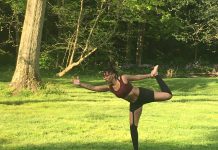 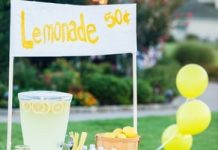 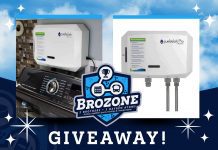 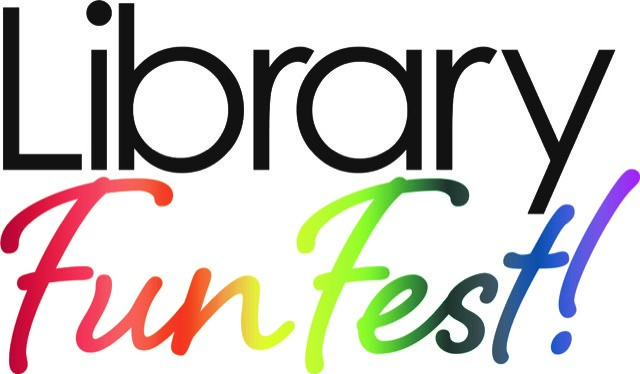