It was a big surprise one afternoon when we visited the ENT (on the advice of my daughters Speech Therapist) to find that Izzy had “extremely” large tonsils and they needed to come out. She never had strep throat, or a history of sore throats. She never in her life had an ear infection.

The ENT asked me- “Does she always sound like this?”
I said “Like what?”
She said “Her voice has a very nasal sound. Does she always breath through her mouth?”
I looked at Izzy who was indeed breathing through her mouth.
“Not always.” I said but I was mentally trying to remember. I don’t know, I guess she did it a lot!
The doctor asked “Does she snore?”
I said “YES!” That one I was certain of but had thought nothing of it.
“She probably has sleep apnea. These are so large they are impeding on her airway through her nose.”
I was shocked. This actually made a lot of sense. Izzy had been having interrupted sleep for awhile. I just thought she was a bad sleeper!

Izzy’s tonsillectomy (and adenoid removal) was scheduled for June 1st. The date loomed frighteningly in my head. Surgery! My baby! 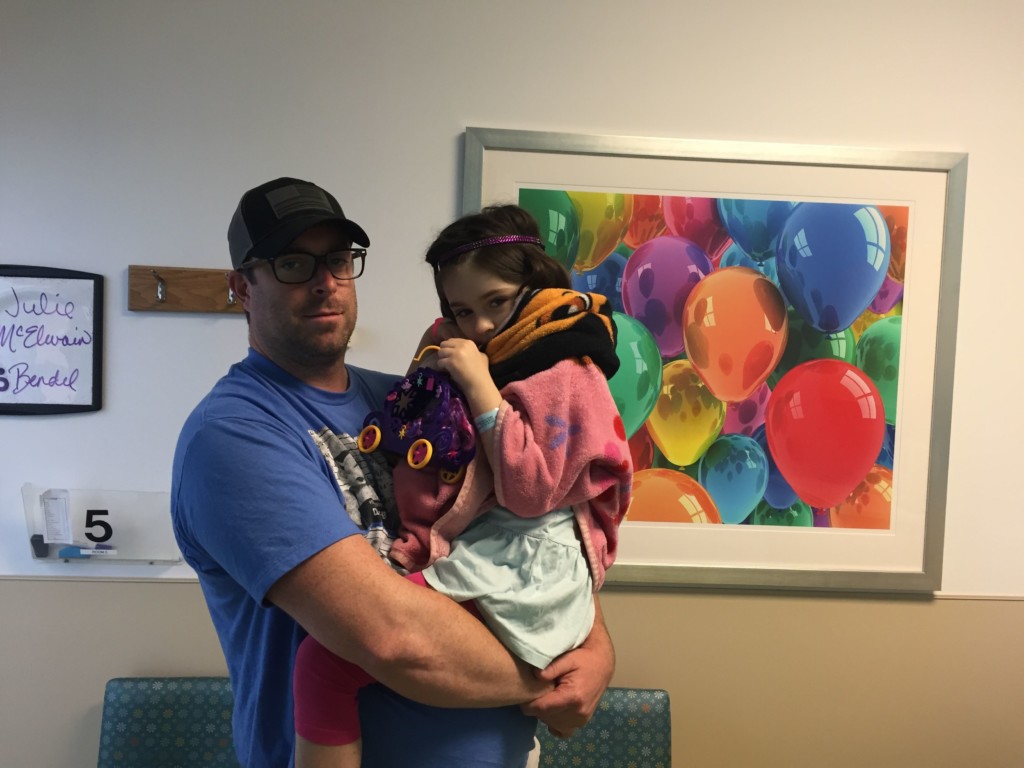 I was reminded by family and friends that this was a very routine surgery and many many have gone before her. I was also warned by some that the recovery was brutal. Others just told me she would be fine and just eat lots of popsicles. I took a deep breath and told Izzy exactly what was going to happen (or what i thought would happen). I said that her tonsils were lumps in her throat and they needed to be cut out by the doctor. She grabbed her throat and gasped. I said she would be asleep and not feel pain while the doctor was doing it, but when she woke up and for a couple weeks after her throat would be sore. She fluffed it off and said “Well I’m not going to go to sleep for that doctor” and so I told her they would give her medicine to make her sleep. She told me indignantly that she would spit that medicine right back at the doctor. I told her it would probably go in her like a shot. She scowled and stewed over that for awhile. I told her that ultimately she would sleep better and feel better but what does that mean to a 5 year old who doesn’t think anything is wrong with how she feels right now?

As we got closer to her surgery I stocked up on: Juice boxes, popsicles, sherbert (they don’t recommend dairy), library books (for her and myself), DVDs, and some Shopkins blind bags in case I needed them for bribes 😉

When the day of the surgery came Izzy was surprisingly calm about the whole thing. I on the otherhand was a basket case. On the way there I reminded her what was going to happen. She scoffed at me and said “I will be asleep before they give me any shots mom”. When we were admitted to Children’s she told the receptionist, “I’m going to sleep before I get any shots!” to which I started to say “No, honey you need to get an IV catheter..” and the receptionist gave me a dirty look. “That’s right honey!” she said, “No ouchies here!”. She told me that they give the kids “magic air” before the IV catheter so they don’t feel that at all. Well, that’s great then! 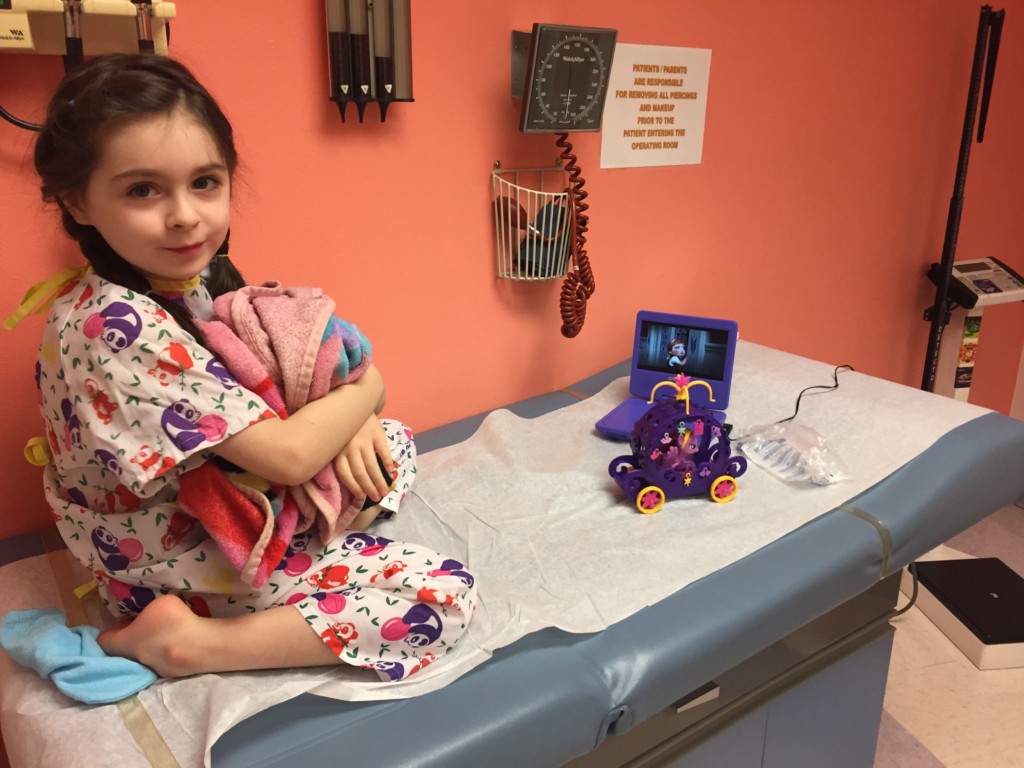 Children’s Hospital (North location) was phenomenal. They treated Izzy like an absolute princess. She had a portable DVD player with Disney movie of choice playing, and a huge play area to distract her while we waited for her turn for surgery. I was able to put scrubs on and go into the OR with her to hold her hand while she breathed the “magic air” which really eased my anxiety too. Afterwards in the recovery room the nurses were angels. They even have a slushee machine with different flavors! 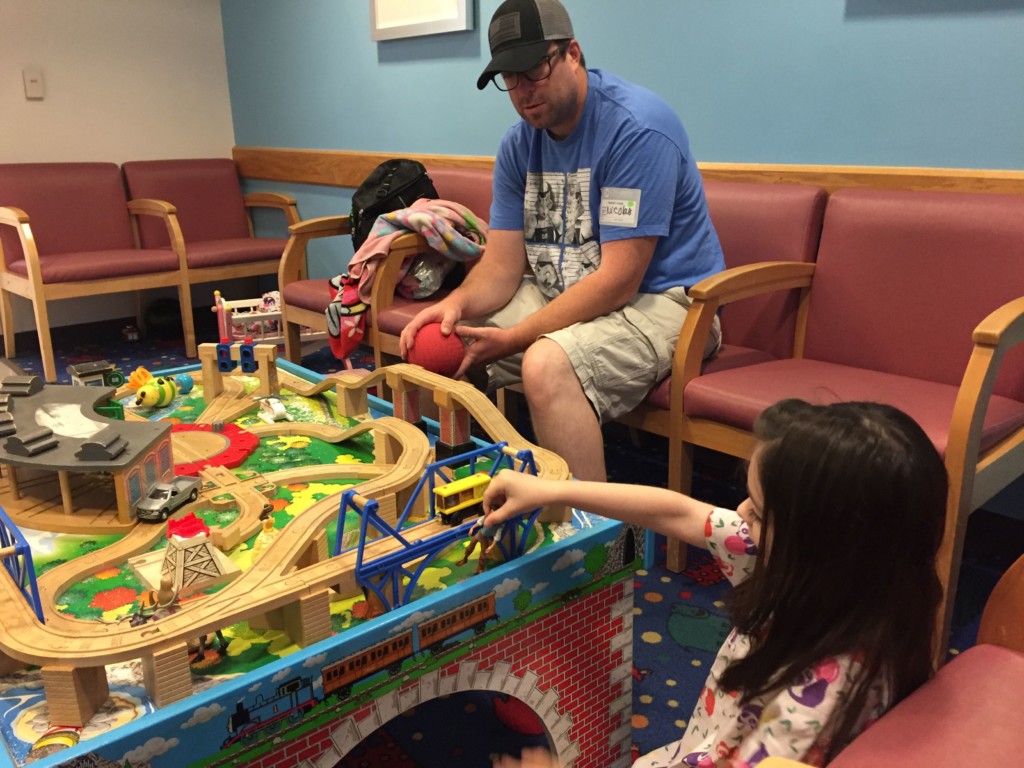 The actual procedure only took 40 minutes and the surgeon came out to tell us Izzy did great. We got to see her when she started waking up in recovery. 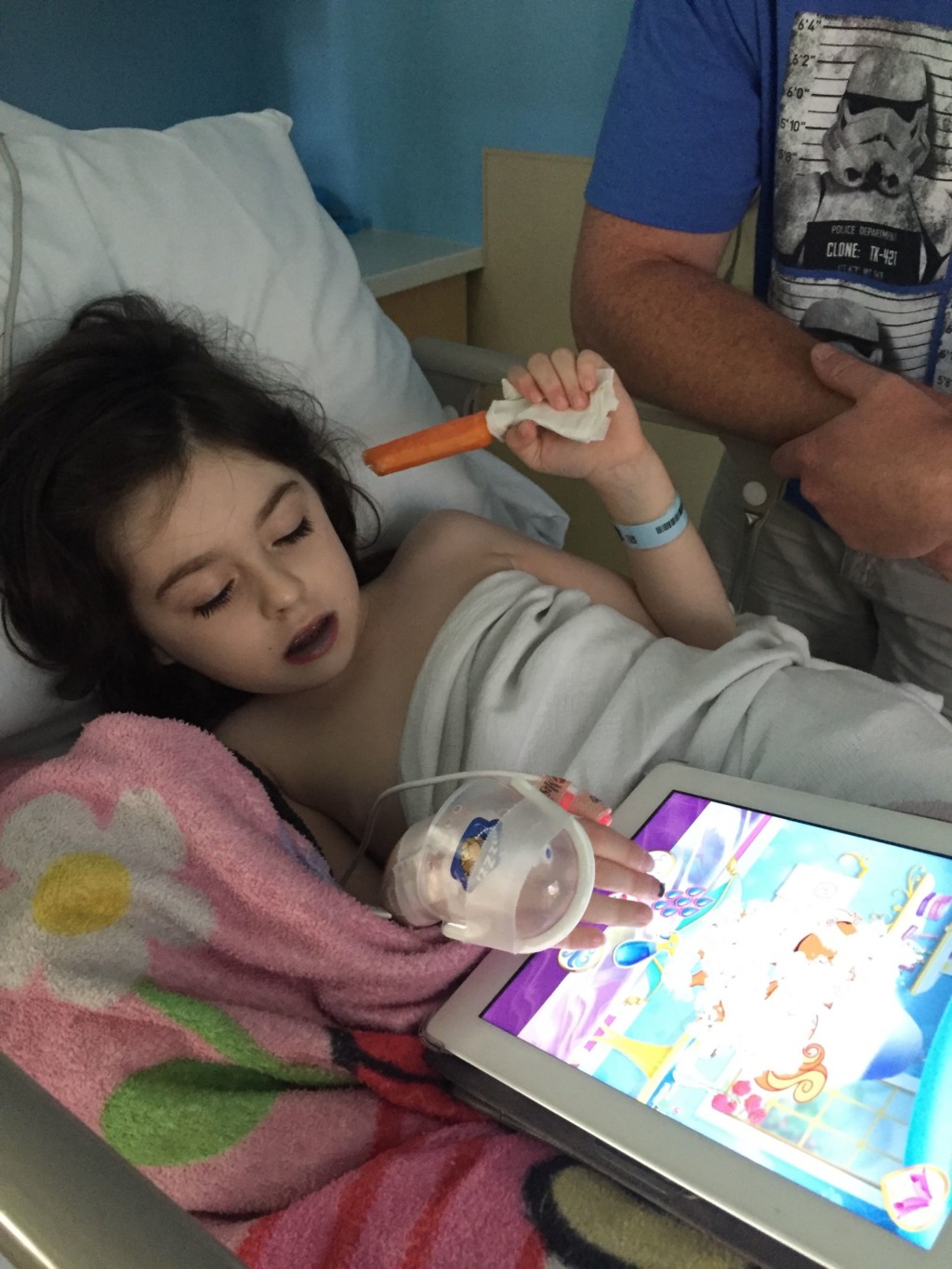 The first day at home after the surgery was a little rough. As soon as the surgery drugs wore off Izzy was in a lot of pain. She is a drama queen and it was really hard to help her keep her voice down ( the more she screams the more it agitates the throat). For two weeks we have to keep her voice down and refrain from any activities that would increase her heart rate (swimming, play ground, bike riding, etc) That sounds like a long time to both of us.

Everyone told us to just keep the popsicles coming so we stocked up and had like every shape and flavor available. We also had Italian Ice, and two kinds of sherbert. Well it has been a week and Izzy has maybe ate 2 popsicles, a bowl of sherbert and no Italian Ice. She says its sour and hurts her throat.

One of the toughest things is that they recommended that she drink 2 liters of fluid a day. That’s a lot for a little girl!! Since she won’t eat the frozen treats (they would count towards the 2 liters) and she hasn’t been fond of juice boxes either that means we are constantly coaxing her to drink water. The Shopkins bribes have come in handy for that! But we quickly ran out and have tried everything under the sun to get her to drink including a 5 year old version of power hour with water!

It really does help though, we can tell as soon as she isn’t drinking enough the pain comes back with a vengence!!!

(below picture is from the ride home after surgery. she still looks out of it!) 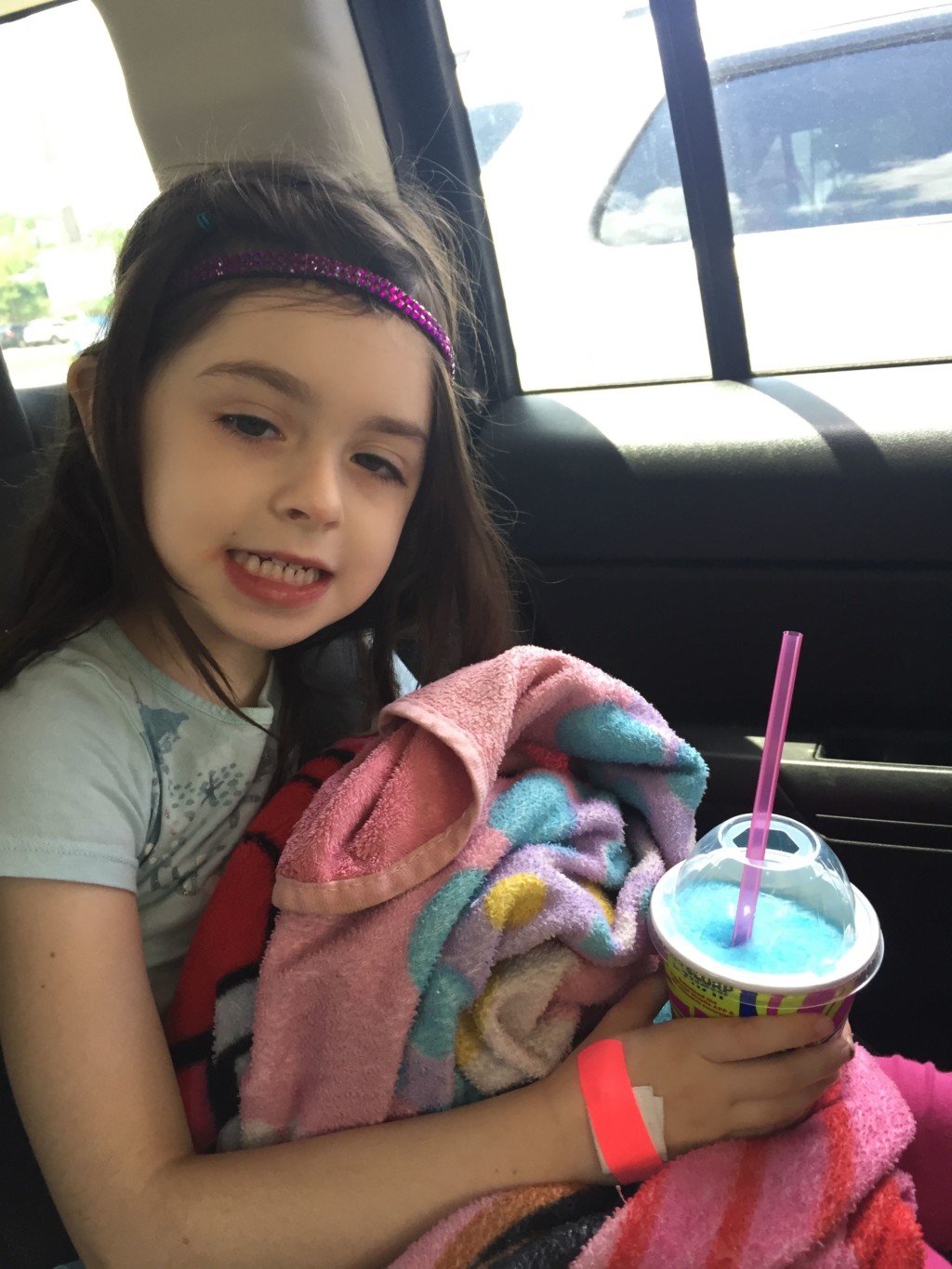 Some of the things we wished we had stocked up on are: Children’s Tylenol (Izzy has been getting the max dose for her weight every 4 hours), soft breads, syrup, pancake batter, soft fruits like peaches, applesauce, and those little individual rice servings.

Oh and one more note to parents: the two weeks after a Tonsillectomy is your free pass to let your child watch as much TV, and play as much on the Ipad as they want! Also to let them eat whatever they want for two weeks!! That may be the only perk for you, as the rest is pretty intense!