Toddlers are stubborn, irrational creatures. They want to go outside to play but won’t put on shoes. They want a steady stream of snacks but won’t sit for a meal. And that’s all in the same twenty minute time period–at least at my house. But sometimes, there are kernels of wisdom in between the tantrums.

If I’m in the right headspace, I can hear her wise words rise above the mind-chatter and house-clutter. So once in a while, I try to slow down and listen, really listen, to my little girl. 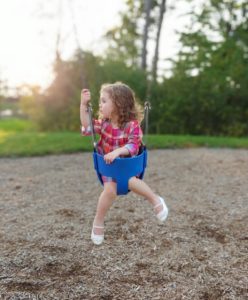 One day, a few weeks ago, my daughter stunned me into silence. She called for me when she woke up from her afternoon nap. I opened her door, and she asked me the question right away. It was still dark in her bedroom, but I could see her crouched in the corner of her crib.

Do you want to watch me grow, mama?

And then she sprouted up like a tree–standing on her tippy-toes and arms stretched high. She went through the process a few more times, adding flourishes and stuffed animal props to her game.

She surprises me like that all the time. So literal yet so darned wise. She’s starting to teach me more than I am teaching her.

And last month, she reminded me to take it easy, so to speak. She kept saying “Christmas Ease,” even though she meant “Christmas Eve.” She often mispronounces words, but once in a while, it really gets me thinking. (See my post from 2017 for a Merry MESS-mas story.)

It’s hard to get stressed about the holidays when your kiddo is constantly running around and yelling, “It’s Christmas Ease!” Yes universe, I hear you. Find the ease. Ditch the worry. Thanks for reminding me with such an adorable and loud messenger.

Even earlier in the year, she started preschool with some separation anxiety. So she started saying, “Mama always comes back” to herself on the familiar car ride to her classroom. It took me awhile to realize that she developed a little mantra.

This is the same kid who needed tight swaddling, hours of bouncing, and so much shushing in her tiny, infant ears that I thought I was going to pass out from hyperventilation. But now, she’s coming up with her own surprisingly healthy coping mechanisms. She’s just two years old–three this spring–and she thought of something much better than I could have devised. She still says it every time I leave her at the door with her teachers. 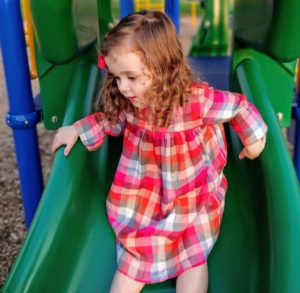 It’s not that she’s an oracle. It’s that she’s not afraid to look vulnerable. That’s her state of being and maybe one of the biggest perks of being a kid. She leaves her heart open and speaks her mind–dispensing life lessons in her wake.

Hold my hand. Stay a little longer. Read me a story.

Such honesty from such a tiny person. I should take a page from her book and say what I mean more often. So as I start this new year, I hope to self-advocate a little more and stress a little less. I’ll keep listening to my little girl though. She seems to know what she’s doing.