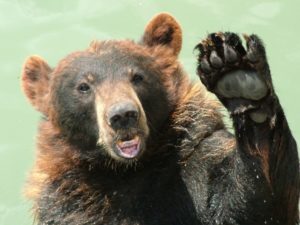 For the last few years I’ve been getting Facebook advertisements for novelty t-shirts that say things like “Mommy Needs a Glass of Wine” and “Mama Bear.” I hate them both. At first, I thought the Mama Bear shirts were cute, evoking images of the story of The Three Little Bears. I didn’t realize, until a few years ago, that it was a cutesy way to refer to a mother raging-out at anyone whom they feel has slighted their child.

Fair enough, I guess. I know I’ve gotten very angry at people who have done something that I perceive as less-than-kind to my son. I’ve stood up to these perceived offenders, but I’m 40-year-old woman, not a bear, so I’ve done it in a way that didn’t make a spectacle of myself nor my son. I also haven’t done it every time someone commits the slightest of transgressions against him.

I feel like these cutesy memes and t-shirts espousing the virtues of wild-animal motherhood are just vehicles to excuse what I believe has become our allowance for poor behavior through rage-culture and people “just telling it like it is.”

Have you seen those other, ridiculous memes that say things like “I’m not Willy Wonka, I don’t sugarcoat sh*t”? Gag. You can be truthful with others without being a total jerk. True story.

My family took a trip to Disney World last fall. If you’ve ever been there, you know it’s literally teeming with people. The weather is often very hot and humid, and people can be quite unpleasant. For me, someone who’s not a big fan of “people” as a concept, it was a lot to handle. Still, I enjoyed getting to experience it with my son and husband. We had a, pardon the cliché’, magical time, except for one particularly unpleasant woman we had the misfortune of running into in Epcot.

While getting in to line for a ride, my son stepped on a woman’s foot. I didn’t notice and I don’t think he did either. The woman proceeded to yell after my son, 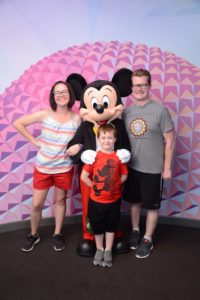 “EXCUSE YOU!” I had heard her but didn’t realize that she was talking to him/us. We headed in to the line and she started waving her hands at him and said, “YOU, YEAH, YOU! EXCUSE YOU!” My son recoiled. Once I realized what was going on, I said, “Who are you talking to like that?” and she replied, “Your son! Your son stepped on my foot!” I leaned down to my son and said, “Can you please apologize to the *lovely* woman for stepping on her foot?” He quietly said, “Sorry…”. Addressing the woman, I said, “There you have an apology. In the future, perhaps you can consider a better way to address a six-year-old?” She huffily walked off. What if I matched her ridiculous behavior with my own? It probably would have scared my son and turned in to a horrible memory associated with a family vacation. Of course, it’s rude to step on someone’s foot without acknowledging it or apologizing. Had it been me who stepped on her foot, I could understand her reaction (maybe) – but to berate a six-year-old in DISNEY WORLD? Just let that sink in.

My son was shaken by the interaction. He kept talking about how that lady yelled at him. I tried to change the subject, but he kept bringing it up. Instead of feeding in to his “mean lady” theory, I said, “Maybe she’s having a really bad day. Maybe something happened today that made her really sad or angry and she took it out on us?” He seemed satisfied with that answer and he didn’t mention it again on the trip. Of course, in my mind, I was still really fired up and angry over the lady’s behavior, and honestly, I didn’t care what type of day she was having. Truth be told, I wanted to jump over the ropes and punch her in the mouth (and in my younger, pre-motherhood years, I may have done it) but what would that behavior have showed my son? Her behavior enraged me, but it’s not my job to share my rage with my son. It’s my job to model how to deal with difficult people and situations.

Not long ago I was at a gathering with other kids and parents. I overheard a mother, whom I do not know, loudly bragging about berating a store employee because something her son wanted was out of stock. She proudly shared how she verbally shredded the high school kid working at the cash register because, “…he didn’t know who he was dealing with…a MAMA BEAR who’s going to do for her son!”

You’ll have to excuse some typos here and there as I’m having trouble writing this because I’m still rolling my eyes.

What horrible behavior to model for your child. An item your child wants isn’t in stock and somehow, it’s the cashier’s fault? And you’re gleefully sharing your heinous behavior with others in hopes of receiving pats on the back? Gross. Luckily, I was off to the side by myself and this woman wasn’t looking to me for a reaction, because, honestly I may have had to go “decent person bear” on her. Is that a thing? Decent person bear? Maybe it should be. Also, keep in mind the person this woman was verbally MAMA BEAR-ing out on was also a child.

Look, we’re all protective of our kids. We all want to defend them when they’re treated poorly, no matter the gravity of the offense. Step back and take a breath. Your child is watching you. Your child is looking to you for how to deal with these situations. You absolutely should stand up for your child, when warranted, however, raging out at complete strangers is not the way to go about it. Rawr.